Michael English got his start singing with his family's group, the Singing Samaritans, in the 1970s. After that, he joined the Singing Americans for a year or so in 1981-82, pulled brief stints with the Happy Goodmans and Couriers Unlimited, then returned to the Singing Americans for two more years. It was during his second tenure with the Singing Americans that his live rendition of "I Bowed On My Knees And Cried Holy" (from Live And Alive) came to be widely known. Southern Gospel radio embraced and played the song repeatedly, putting it at the top position on the Singing News monthly airplay chart for the first three months of 1985.

By the time the song peaked in popularity, English had joined the Gaither Vocal Band (and later, by extension, the Bill Gaither Trio). He remained with them for nine years, embarking on a successful solo career as well during the early 1990s. His first solo release was a self-titled project (1991) that included notable songs like "In Christ Alone" and "Mary Did You Know." A follow-up project titled Hope was released in 1993. Both projects were originally released on the Warner Alliance label.

After winning four individual Dove Awards in 1994 (including the coveted Artist Of The Year and Male Singer awards) and sharing several other Doves with the Gaither Vocal Band, English's career came to an abrupt halt a week later. His label heads at Warner Alliance faxed a press release to Christian bookstores and other media outlets across the nation cryptically disclosing that they were removing him from their roster. The press release included a vague quote from English regarding "mistakes" he had made. It was subsequently revealed that English had had an affair with one of his backup singers. English has since said he wanted to quietly withdraw from the music scene for a period of time. He had already resigned from the Gaither Vocal Band before the news was published. Feeling betrayed by his label and the Christian music industry in general, English reacted angrily, returning the Dove Award statuettes he had received a week earlier to the Gospel Music Association. (The GMA still recognizes English as the winner of the awards he received in 1994.) As a result, Christian radio ceased to play his recordings, and bookstores likewise stopped stocking his products for a number of years.

English was soon signed by Curb Records. He revived his solo career in 1995, initially targeting the secular market. His first foray into secular music was a duet with Wynonna Judd titled "Healing," which was used in a movie starring Richard Dreyfuss (Silent Fall). The song was also used as a title cut for a CD that otherwise repackaged songs from his first two solo releases. His next project was Freedom (1996), a CD that yielded a secular hit song for English titled "Your Love Amazes Me."

He then returned to the Christian market with Gospel (1998) and Heaven To Earth (2000). Hailed as his big comeback (with Gospel being a lower budget release), the success of Heaven To Earth was thwarted when it was revealed that English was suffering from an addiction to painkillers and had obtained some prescriptions illegally. Because he had completed a drug treatment program, English was given a suspended sentence and community service, though he continued to struggle with drug addiction for several more years.

English has since released projects titled Christmas (2003) and a greatest hits collection with two additional new songs titled In Christ Alone (2006). Although none of his solo recordings are typically classified as Southern Gospel, English has continued to be active in Southern Gospel music. He has produced recordings for The Martins, Jeff And Sheri Easter, Gold City and others as well as making occasional appearances with other artists such as Mark Lowry and the Gaither Vocal Band.

In 2007, English released an autobiography titled The Prodigal Comes Home. This book describes his fall from grace including his view of what led to his initial extramarital affair, his relationships with women outside of marriage after his divorce, his various brushes with the law, and his continued struggles with drug addiction.

In early 2009, Bill Gaither announced that Michael English, David Phelps, and Mark Lowry were rejoining the Gaither Vocal Band to replace the departing Guy Penrod and Marshall Hall. He departed the group again in 2013 to resume his solo career. 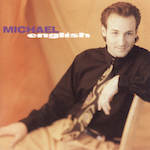 hi-res
1991 Michael English (Warner Alliance/WBD-4104): Solid As The Rock; Mary, Did You Know; Do You Believe In Love; In Christ Alone; Take The Time; Start A Party; Let's Build A Bridge; His Heart Is Big Enough; Love Won't Leave You Out In The Rain; Heaven.

hi-res
1993 Hope (Warner Alliance/WBD-9-45207-2): Save Me; There Is A Love; Holding Out Hope To You; Message Of Mercy; Love Moves In Mysterious Ways; A Place Called Hope; Savior; I've Got A Love; Always For You; There's Not A Crown Without A Cross. 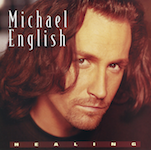 1996 Freedom (Curb Records): Freedom; Your Love Amazes Me; I Wanna Know; Why Didn't I; When I Need You; Find My Way Back To You; Give It Away; Love Has A Mind Of It's Own; The Wind; Freedom Field.

1998 Gospel (Curb Records): John The Revelator; Blessed Assurance; Midnight Cry; Up Above My Head; Go Rest High On That Mountain; Gospel Ship; Had It Not Been; Dig A Little Deeper; I Bowed On My Knees And Cried Holy; I Surrender All.

2006 In Christ Alone (Curb Records): In Christ Alone; Solid As The Rock; Mary Did You Know; Heaven; Holding Out Hope To You; Save Me; There Is A Love; Love Moves In Mysterious Ways; Healing; Your Love Amazes Me; I Bowed On My Knees And Cried Holy; Heaven To Earth; Right Where You Are; The Maker Of The Road.

2008 The Prodigal Comes Home (Curb Records): Sanctuary; Feels Like Redemption; Break Through; The Only Thing Good In Me; Don't Think I'm Not Thankful; Redeem Me; Time; A New Day; Have A Little Faith In Me; The Prodigal Son; Right Where You Are. 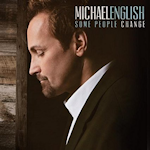 hi-res
2012 Some People Change: I Ain't Givin' Up On Jesus; Come To The River; I'd Rather Have Jesus; Some People Change; Knew You Were Waiting; That Great Day; In Christ Alone; Journey Now; Wakin' Up The Dawn; Stubborn; I'm So Lonesome I Could Cry. 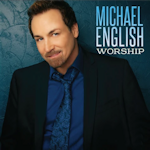 hi-res
2015 Worship: Blessed Be Your Name; 10,000 Reasons; A Little More Jesus; Amazing Grace My Chains Are Gone; Everybody Clap Your Hands; O The Blood; Let It Rain; No Weapon; He's Able; Revelation Song; Hallelujah For The Cross. (Cracker Barrel's exclusive edition of Worship adds I Bowed On My Knees). 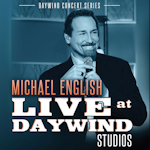 hi-res
2015 Live At Daywind Studios: Solid As A Rock; Daystar; Hope Medley (includes Holding Out Hope, Love Moves In Mysterious Ways, Your Love Amazes Me and Save Me); Mary Did You Know; Come To The River (duet with Russ Taff); Blessed Assurance; Please Forgive Me; Feels Like Redemption; In Christ Alone; I Bowed On My Knees And Cried Holy. 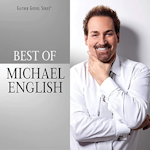 hi-res
2021 Best Of Michael English (Gaither Music Group/): Temporary Home; The Blood Will Never Lose Its Power; Better Day; Daystar; Rasslin’ Jacob; Until I Found The Lord; Lord Feed Your Children; Low Down The Chariot; God Leads Us Along; Give Up; Winds Of This World; In Christ Alone (DVD only); I’m Free; Please Forgive Me; These Are They; I Believe In A Hill Called Mt. Calvary; Child Of The King; Where Could I Go; I Bowed On My Knees.