The Melody Masters name has been used by several groups down through the years.

Mosie Lister left the group in early 1947. Calvin Newton joined to sing tenor, and Tootle moved to baritone. Lee Kitchens left the group when they relocated to Greenville, SC. He was replaced by Jake Hess who had been singing with the Sunny South Quartet for a short time. Times were lean for the Melody Masters in Greenville, so they moved on to Birmingham for a short time, again without much success, before ultimately settling in Lincoln, Nebraska.

In the spring of 1948, the Melody Masters started a radio program on KFAB radio in Lincoln. Most of the surviving recordings by the 1940s-era Melody Masters are radio transcriptions from their fifteen minute show on KFAB. Sponsors for the show included a company that made car seat covers and another company selling "Baby Blue Eyes" dolls. Cat Freeman was singing tenor by this point with Hess, Tootle, Wetherington and Varner completing the lineup. Wetherington referred to Varner as the "king of the keyboard" on their radio shows. Lane Shaw was also associated with the group, filling in for Freeman when Freeman was sick with appendicitis for an extended period of time.

Although their journey was relatively short-lived, the 1940s Melody Masters Quartet paved the way for some of the most highly regarded gospel quartets in Southern Gospel history. Mosie Lister, Jake Hess, James Wetherington and Cat Freeman ultimately became members of the Statesmen Quartet. Calvin Newton, Cat Freeman and Wally Varner were all part of the Blackwood Brothers, and of course, Newton had a successful run with the Oak Ridge Quartet.

There was a Melody Masters Quartet based in Spartanburg, SC from around 1952 through 1962. This group performed on WSPA in Spartanburg and was managed by Acton McClellan. By the early 1960s, Miles Cooper was singing lead and the group was headquartered in Asheville, NC. This group was reportedly on track to become Wally Fowler's next version of the Oak Ridge Boys, but by this point, Fowler no longer had the rights to the Oak Ridge Boys name. By 1963, two members of the Melody Masters had formed a group with a similar name, the Pine Ridge Boys.

1990s and 2000s Melody Masters
In the mid-1990s, Jim McAbee, Richard Sanders, Roger Burnett, Dennis Hughey, and Keith Cantrell revived the Melody Masters name. By 1996, former Singing Americans lead singer Scott Whitener had joined the group along with tenor/pianist Chris Roberts. This lineup (Roberts, Whitener, Burnett, Sanders) recorded on the Journey Records label and achieved success with performances on the main stage at the National Quartet Convention and the Canadian version of the convention that was held in Red Deer, Alberta, Canada.

Sanders was ultimately replaced by Cyle Cornish, and Roberts was replaced by Derrick Boyd. After a few months, Derrick Boyd and Roger Burnett left the Melody Masters to form New Millenium with former Blackwood Brothers bass singer, Ken Turner. At this point, Whitener and Cornish brought in future Mark Trammell Quartet tenor Eric Phillips and future Kingsmen Quartet lead singer Phillip Hughes to fill the tenor and lead spots respectively. Whitener shifted to baritone, though technically, he still sang lead on many of their songs with Hughes and Phillips' harmonies pitched higher.

Financial woes forced the Melody Masters Quartet to disband in 2002.

The 1996 lineup of Sanders, Burnett, Whitener and Roberts reunited in 2005 to record a CD of new material (Big Change) and perform on a part-time basis. A year later, they changed the group name to Carolina Quartet, sometimes billing themselves simply as Carolina. Richard Sanders left the group when the name change occurred.

Other Melody Masters Groups
There was a Melody Masters Quartet in Princeton, Indiana in 1953 that included former All American Quartet members Manuel Battles and Elmer Childress.

Earl Weatherford changed the name of his Weatherford-Stamps Quartet of California in 1953 to Melody Masters Quartet. They relocated to Wichita, Kansas and by 1955 had moved to Ft. Wayne, Indiana. This lineup included Armond Morales and Les and Raye Roberson in addition to Earl and Lily Fern Weatherford.

There were other Melody Masters Quartets in Illinois and West Virginia during the early 1960s. 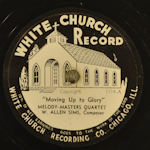 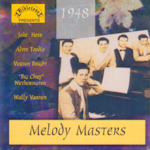 hi-res
1998 1948 (Bibletone Records/10113): Somebody Loves Me; Just A Little Talk With Jesus; The Lord Is Coming Bye And Bye; I’m Telling The World About His Love; An Evening Prayer; Headin’ For Gloryland; No Tears In Heaven; I’m Just A Stranger Here; It’s All Over Now; Heaven Now Is In View; Let Me Travel (Alvin Tootle, Jake Hess, Vernon Bright, Jim Wetherington, Wally Varner) (This was a collection of songs recorded on radio broadcasts in Lincoln, Nebraska). 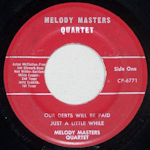 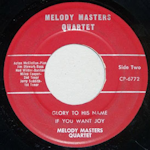 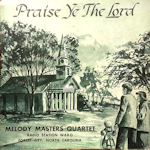 hi-res
196? Praise Ye The Lord (WBBO Radio): Child Of The King; How Great Thou Art; I See Jesus; Sunlight; Pass Me Not; Hard Trails; Just A Little While; God Made A Way; What A Day That Will Be; On The Other Side Of Jordan; Heaven's Jubilee; I'll Fly Away.

1990s and 2000s Melody Masters
1997 University Live (New Voice Music/NVCD-9808): My Lord; Walk That Lonesome Road; Hide Thou Me; First Day In Heaven; Sheltered In The Arms Of God; Jericho Road; Daddy Sang Bass; Near The Cross; I Bowed On My Knees And Cried Holy; Sinner's Plea; How Great Thou Art; Had It Not Been; Sweet Beulah Land; I'll Fly Away; Oh What A Savior. (Chris Roberts, Scott Whitener, Roger Burnett, Richard Sanders).

1997 Classic Style (New Voice Records): My Lord; Sweet Beulah Land; It Is No Secret; On The Jericho Road; Oh What A Savior; Near The Cross; Glory Road; I'll Fly Away; I Bowed On My Knees; Room At The Cross. (Richard Sanders, Scott Whitener, Roger Burnett, Chris Roberts). 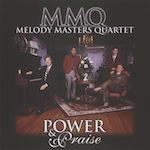 hi-res
1999 Power And Praise (Journey Records/JYD9902): The Old Account Was Settled Long Ago; My Redeemer Lives; There Is A Haven; Sailing Away; You'll Never Be The Same; God Takes Real Good Care Of Me; The Man I Used To Be; Mercy River; Never Be A Tear Shed; Blessed By The Hand. (Chris Roberts, Scott Whitener, Roger Burnett, Richard Sanders). 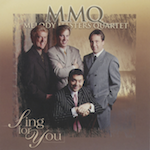 hi-res
2000 Sing For You (Journey Records/JYD0002): Sing For You; God's Grace Is Greater Than All Our Sin; A Real Fine Line; I'll Leave My Burdens At The Gate; Reach; City Of Light; We Have Never Seen What We Shall See; Loud Enough To Wake The Dead; In My Weakness; I'm Taking A Ride. (Chris Roberts, Scott Whitener, Roger Burnett, Cyle Cornish).

2000 Tribute To The Cathedrals (Journey Records/JYD0009): I Can See The Hand; Goin' In Style; Wedding Music; Boundless Love; Sinner Saved By Grace; This Ole House; Sin Will Take You Farther; Step Into The Water; We Shall Behold Him; Can He Could He Would He (Chris Roberts, Scott Whitener, Roger Burnett, Cyle Cornish).

2001 Hymnal Harmony (Custom Records): I Feel Like Traveling On; Just A Little Talk With Jesus; Turn Your Eyes Upon Jesus; More About Jesus; It Is Well With My Soul; Everybody Will Be Happy; How Great Thou Art; I'll Live In Glory; Amazing Grace; Room At The Cross. (Derrick Boyd, Scott Whitner, Roger Burnett, Cyle Cornish). 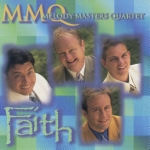 hi-res
2001 Faith (Lion And Lamb Music Group/LLMG062101CD): Faith Now; Lifeboat; On That Heavenly Ride; The Glory Goes To You; Rolled Away; Hold On; He Bought Me Back; Come And Follow Me; A Land I'm Going To; Sow The Seed; The Marriage Supper (Eric Phillips, Phillip Hughes, Scott Whitener, Cyle Cornish, Wayne Berry).

2001 Original (Lion And Lamb Music Group/LLMG111801CD): Gone For Good; He Loved Me Still; Wedding Day; Calvary Made It Just In Time; Just Do It; Nothing Can Take My Salvation Away; I'm Gonna Be There; Come And See; This Man; Looking For Home; Behind Every Great Man There's A Cross (Eric Phillips, Phillip Hughes, Scott Whitener, Cyle Cornish, Wayne Berry). 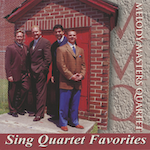 2005 Take A Ride (Custom Records/MMQ-072905): Sing For You; God's Grace Is Greater Than All Our Sin; A Real Fine Line; I'll Leave My Burdens At The Gate; Reach; City Of Light; We Have Never Seen What We Shall See; Loud Enough To Wake The Dead; In My Weakness; I'm Taking A Ride (compilation of previously released material).

2005 Big Change (Son Sound Records/SSD-072005): Big Change; Safe In The Cross; Yes I Know Everything's Alright; Call Jesus; Tis So Sweet; Take Up Your Cross; Heaven On Earth; When He Speaks To Me; Get Up In Jesus' Name (Chris Roberts, Scott Whitener, Roger Burnett, Richard Sanders).

2006 The Legacy Lives On (New Voice Records): The Rich And The Poor; House Of Gold; Your First Day In Heaven; Sheltered In The Arms Of God; I Saw A Man; Little Is Much; Rainbow Of Love; Who Am I; He's A Personal Savior; For God So Loved (Richard Sanders, Scott Whitener, Roger Burnett, Chris Roberts).