Kirk Talley is a Southern Gospel tenor singer and songwriter who began his career as a member of the Hoppers in the 1970s. His big break came in 1979 when he was hired to fill the tenor position for the Cathedral Quartet. He remained with the Cathedrals until 1983. The following year, he joined his brother and sister-in-law, Roger Talley and Debra Talley to form the Talleys. This group lasted until 1993, at which time Talley embarked on a solo career. He also performed selected dates with Ivan Parker and Anthony Burger billed as The Trio.

Talley received a great deal of negative attention nationally when he became the victim of an extortion scheme by a man who threatened to reveal the nature of Talley's sexual orientation. The man was arrested and convicted. Talley subsequently took time off from performing while he received counseling. He returned to touring and released a live recording in 2005.

Talley is an accomplished songwriter and owns his own publishing company: Kirk Talley Music. 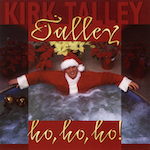 hi-res
1999 Talley Ho, Ho, Ho! (Sonlite Records/SL29292): It's The Most Wonderful Time Of The Year; He Put The Merry In Merry Christmas?; Christmas Card; Fruitcake?; I Pray On Christmas; Let There Be Peace On Earth; We Need A Little Christmas; Angels Sang?; Joy To The World; I'd Still Like To Go To Grandma's House For Christmas; I Can Still Celebrate Christmas; Still Her Little Child.