Eric Bennett is the bass singer for Triumphant Quartet and also serves as emcee for the group. He was with the Kingdom Heirs from 1991 to 2002, at which time he left to become one of the founding members of Triumphant Quartet. 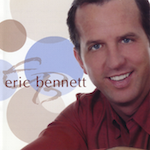 hi-res
2004 Eric Bennett (Custom Records/EB-2004): The Anchor Holds; Long Black Train; Look For Me; Three Wooden Crosses; Butterfly Kisses; Heaven's Jubilee; Who Am I; No Doubt About It; Thank You.

2007 Eric Bennett And Family (Custom Records): I Thirst; Because He Loved Me; Why; My Name Is Lazarus; Arise My Love; Royal Banquet?; I Never Want To Live A Day Without You?; Sixteen Tons; He Stopped Loving Her Today?; I Can't Even Walk Without You Holding My Hand.

Be Of Good Cheer
God Works All Things For Good