Sherman Andrus started his musical career in 1963 singing lead with Andraé Crouch & The Disciples. He remained with the Disciples until 1970.

Andrus then attempted to launch his own group which never really got off the ground. In 1972, he got the call to join the Imperials where he alternated with Terry Blackwood between lead and baritone. Over the next few years, they recorded a popular cover version of "Gospel Ship" as well as several songs now considered to be Imperials classics including "More Than You'll Ever Know," "Spread A Little Love Around," "No Shortage," and "My Child Welcome Home."

In 2004, Andrus reunited with the 1970s Imperials lineup (Terry Blackwood, Jim Murray, Armond Morales, and Joe Moscheo) as well as the present-day Stamps Quartet to record a CD titled The Gospel Side Of Elvis for Daywind Records. 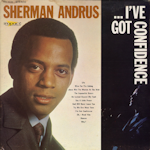 hi-res
1969 I've Got Confidence (Impact Records/HWS 3019): Say A Little Prayer; I've Got Confidence; Oh, I Need Him; Try Me One More Time; Jesus Met The Woman At The Well; He Looked Beyond My Fault; Mine For The Asking; Life; Heaven; The Impossible Dream; Why; God Will Never Leave You (Reissued in 1974 on HeartWarming Records).

1976 Soon Coming (Shalom Records): The Other Side; Father Me; If You Abide In Me; Satisfied; Walk The Spirit; Soon Coming; Only Jesus; Keep Holdin' On; Lord Bless This Day; One God.

1982 Revisited (Christian World Records): All Of My Life; Steal Away; Father Me; Satisfied; Keep Holdin' On; Come On Back; How The Years Pass By; If You Abide In Me; The Otherside; Then You Told Me That You Loved Me.

1988 Caution To The Wind (Amethyst Records): Just Us Two; Have You Met The One (Who Has All The Power); Caution To The Wind; Magnify; He Must Go On; Higher; Broken; One More Night (With The Frogs); Jehovah God; Highway (Of His Love).

1993 Seize The Moment (Exodus Records): Faithfulness; Seize The Moment; He Will Never Leave You; Information Overload; Help Me To See The Light; What A World It Would Be; Nothing Can Separate Me From His Love; African American Trilogy (God Specializes/Amazing Grace/His Eye Is On The Sparrow); Witness; So Much It Hurts.

1994 Live: Hit Me Band (Exodus Records): Magnify; Nothing Can Separate Me; Steal Away; Higher; Just Us Two; Trilogy (God Specializes/Amazing Grace/His Eeye Is On The Sparrow); He's Here Right Now; Yes; My Soul Says Yes; Seize The Moment; Information Overload; Faithfulness; Broken; Have You Met The One (Who Has All Power); One More Night (With The Frogs); Jesus You're So Wonderful; What A Friend; Come Back To Jesus; Witness.
All articles are the property of SGHistory.com and should not be copied, stored or reproduced by any means without the express written permission of the editors of SGHistory.com.
Wikipedia contributors, this particularly includes you. Please do not copy our work and present it as your own.